Showing posts from April, 2021
Show all

Cleaning Out My Portfolio! Look what I found! 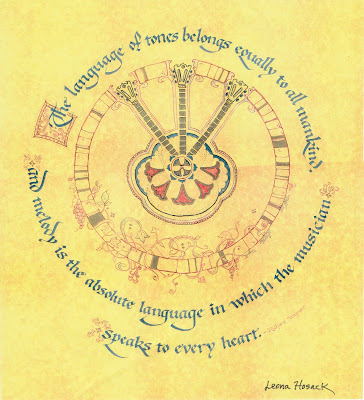 While cleaning out my art portfolio recently I found this piece of calligraphy that I did around forty years ago! I did the guitar design in the center as well.  It was done on parchment paper in ink and watercolors. I think I sold the original years ago to someone, I don't remember who. But I had made a color copy of it before I let it go. The quote is by Richard Wagner.  I studied Calligraphy and Illustration in College among other things and since I don't do much calligraphy anymore, this may be one of the few pieces of my own calligraphy that I have left.   I have made it available for purchase on several well-made and beautiful items in my RedBubble shop. You can check it out with the link below. https://www.redbubble.com/i/throw-pillow/The-Language-Of-Tones-Guitar-Design-by-leonahosack/69895643.5X2YF
Post a Comment
Read more

Illustrating Outside your own race?

A number of years ago, I went to a children's book conference at the University of Mass. with some friends. We got to see Tommy Di Palo (StregaNona, etc.) speak about his Italian-Irish family and how he based many of his books on his upbringing in that culture.  One of the workshops I took that day was presented by the noted African-American children's book illustrator James Ransome. He showed slides of his work and discussed his method of illustration and especially how he used composition to compliment the action in his books! After the workshop I got to ask him a question I had because I was working on a children's book at the time that featured an African-American child.  I asked about illustrating children from a different culture or race than your own. I had previously read an article saying that illustrators or writers should stay within their own race or culture in their artistic endeavors. In other words, since I'm white do I have the right to illustrate or w
Post a Comment
Read more
More posts