My latest submission to Illustration Friday! The theme is Space this week! I had fun playing with this idea. I love drawing kids and their best buddies- animals! 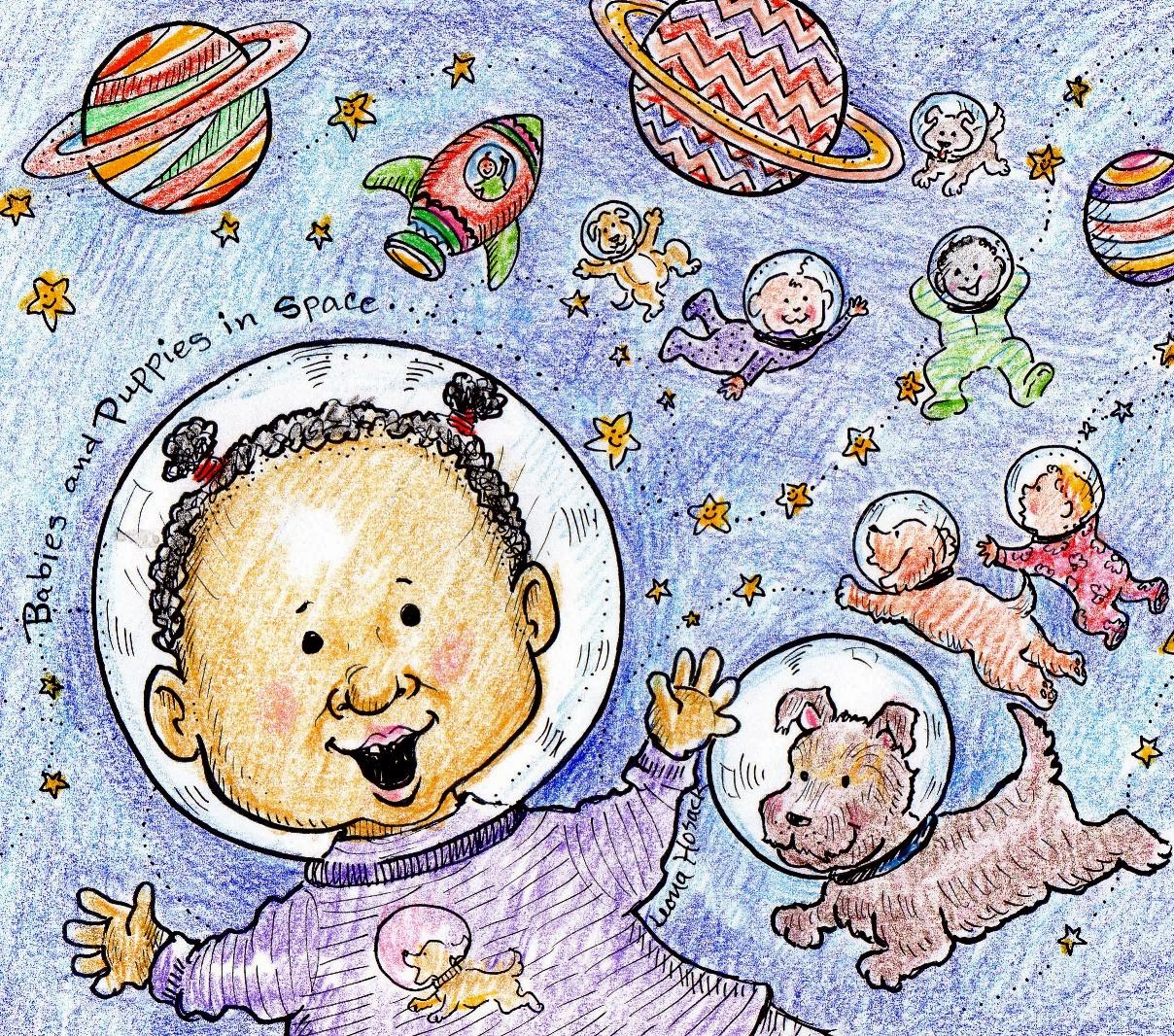 In The Works: Caricature of a Musical Group- drawing instruments! 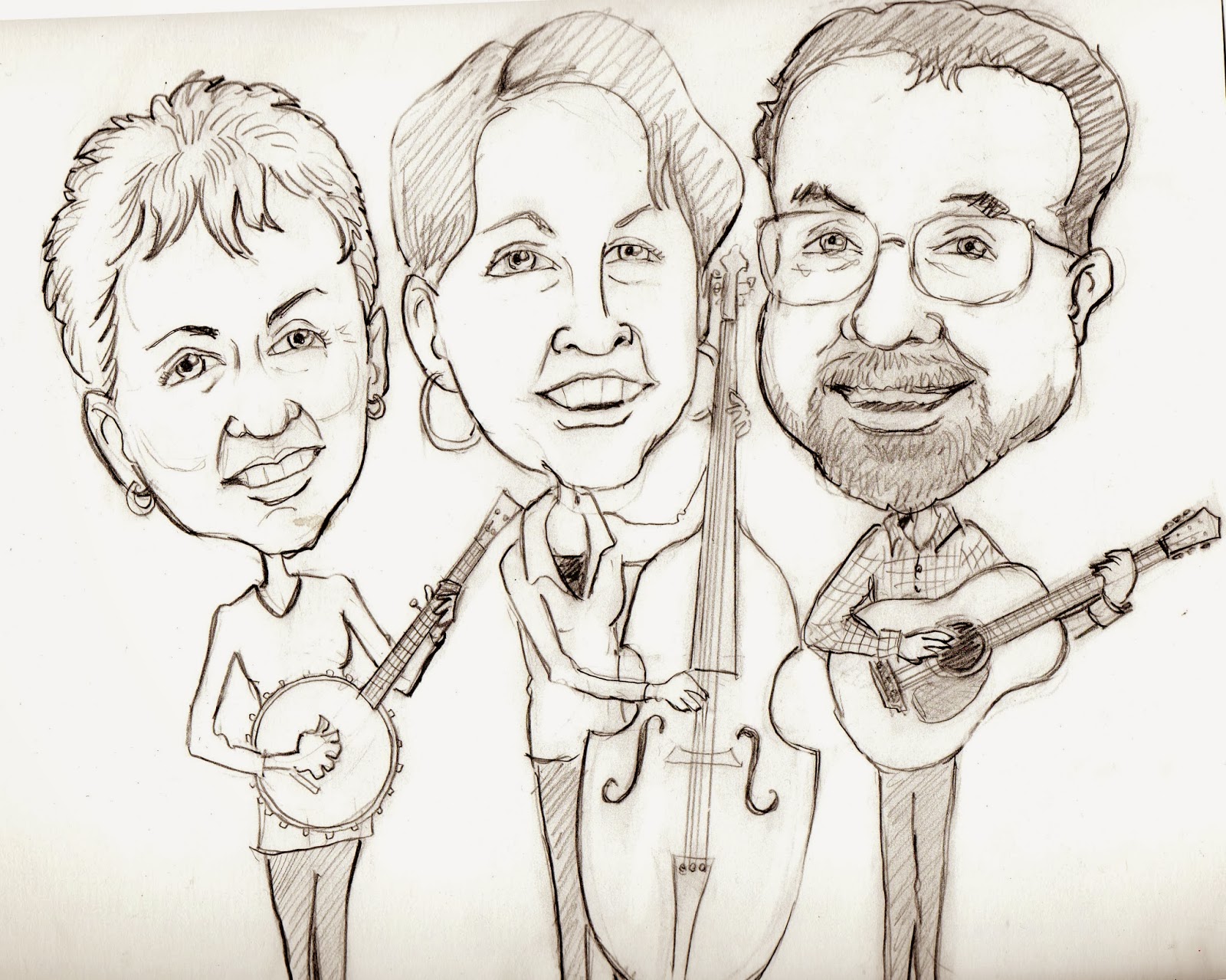 The last couple of days I've been working on a sketch of a caricature of a musical trio from South Carolina. When I get feedback from the person who commissioned this, I'll be doing it up in color. It's so fun doing caricatures that include musical instruments since I play instruments too!

Below are a picture of me with Salt River (on left) and Me with Mary Kennedy in a group called Windstrum.

Here's my submission to Illustration Friday
for this week! The theme is "Twisted"!
I thought it would be fun to play with
the idea of a girl getting all twisted up in her own braids!

New Look For My Blog! What Do You Think?

I've been playing with different looks and focus for this blog. Still learning as I go. I really enjoy all the learning that I'm engaged in, and have been benefiting  lately from Google Helpouts, that offer information on blogging, gmail, twitter and any kind of tech help! Let me know what you think of my new look!

Here's the Custom Caricature I did recently! I colored this one with watercolor. I haven't worked in Watercolor for a while! Alot of fun! I enjoy creating a caricature that is pretty much an accurate likeness, but is still obviously a caricature!

Been working on some Valentine Coloring Sheets! Just for fun!

Here's a how to draw video for Valentine's Day! Happy Heart Day!

The next two designs are available as downloads in my etsy shop! Check out the others as well.
https://www.etsy.com/listing/121257269/digital-download-of-hand-made-valentine?ref=listing-shop-header-3 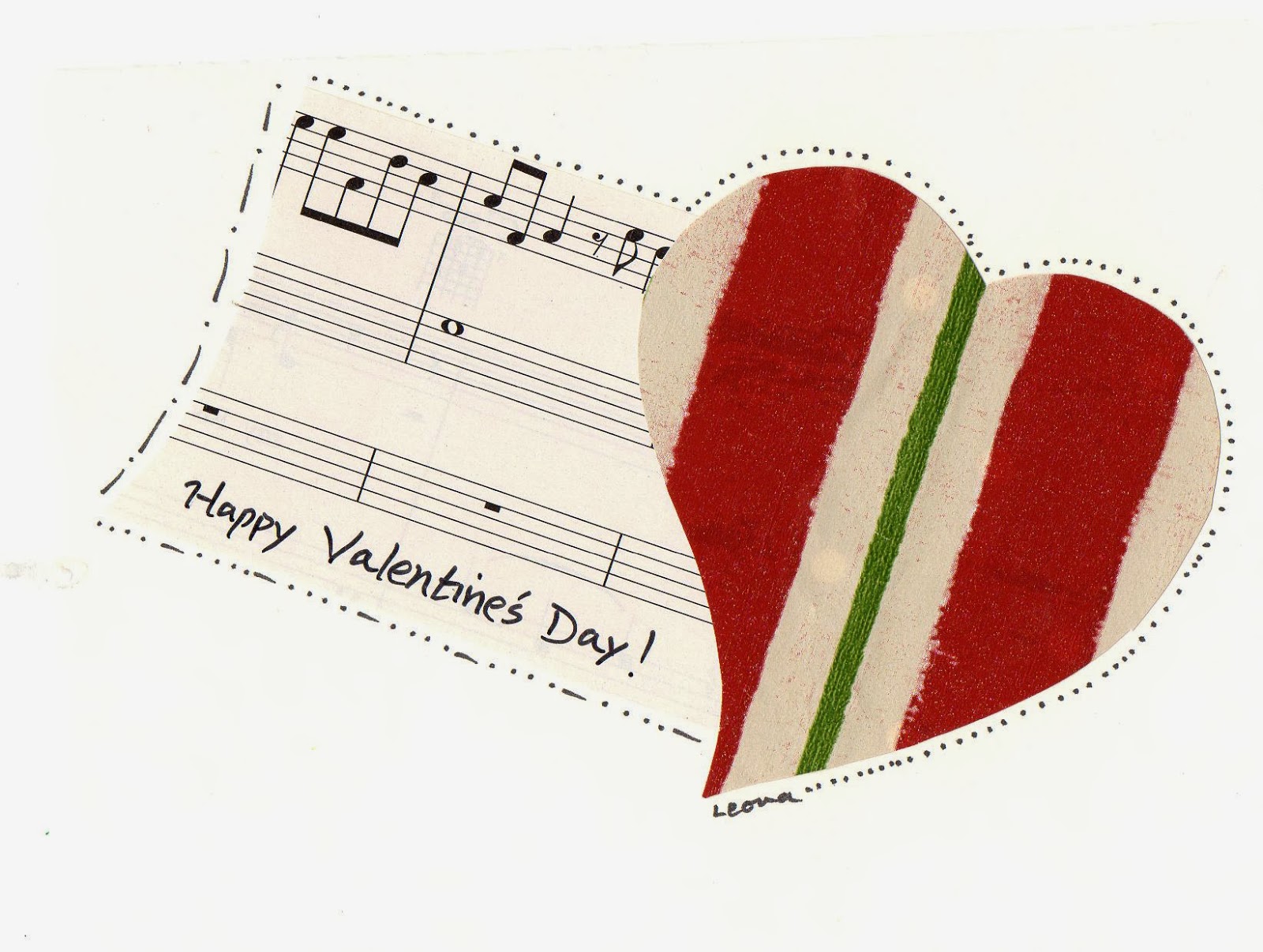 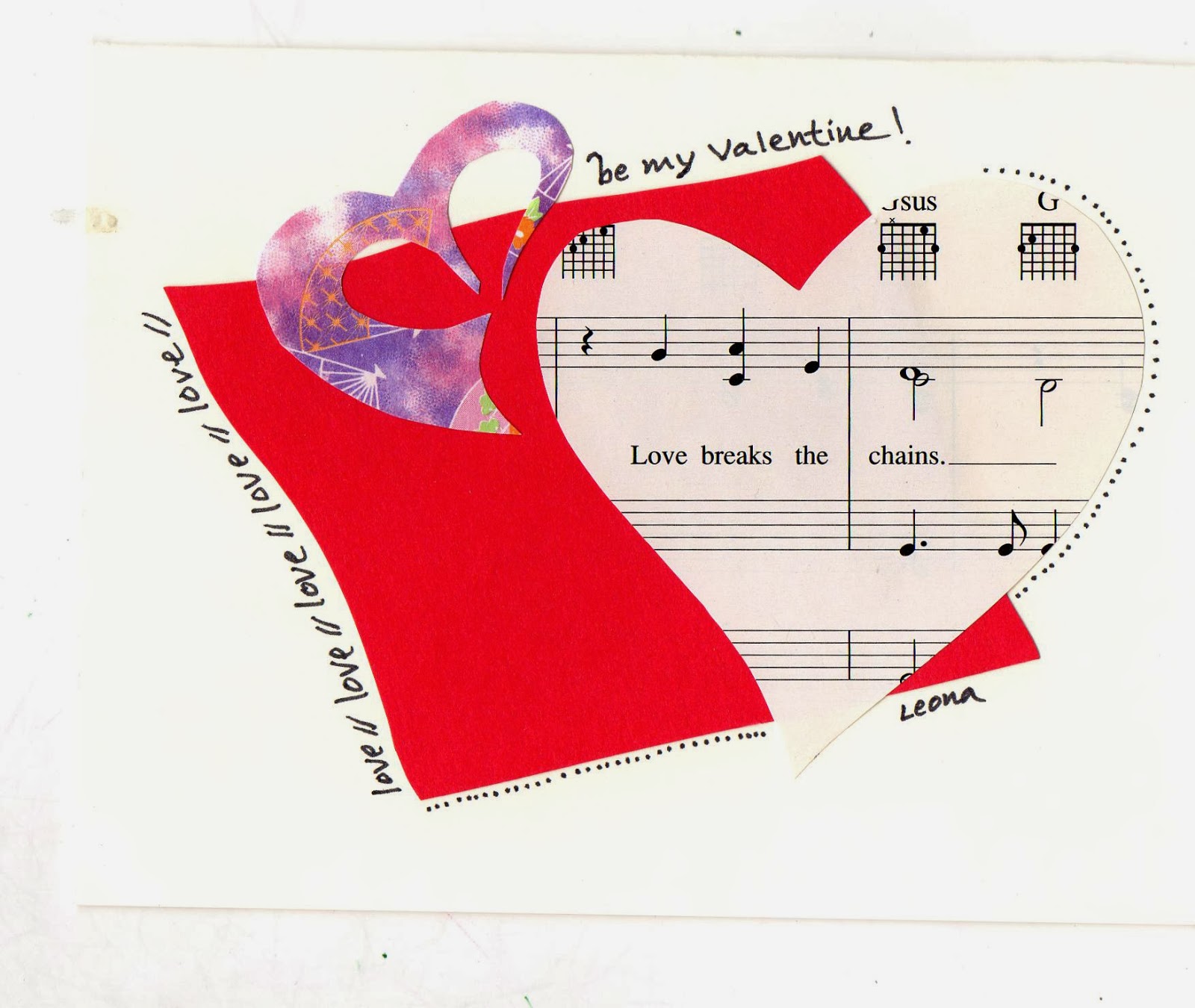 These next two are offered as custom handcut paper items in my Etsy shop! 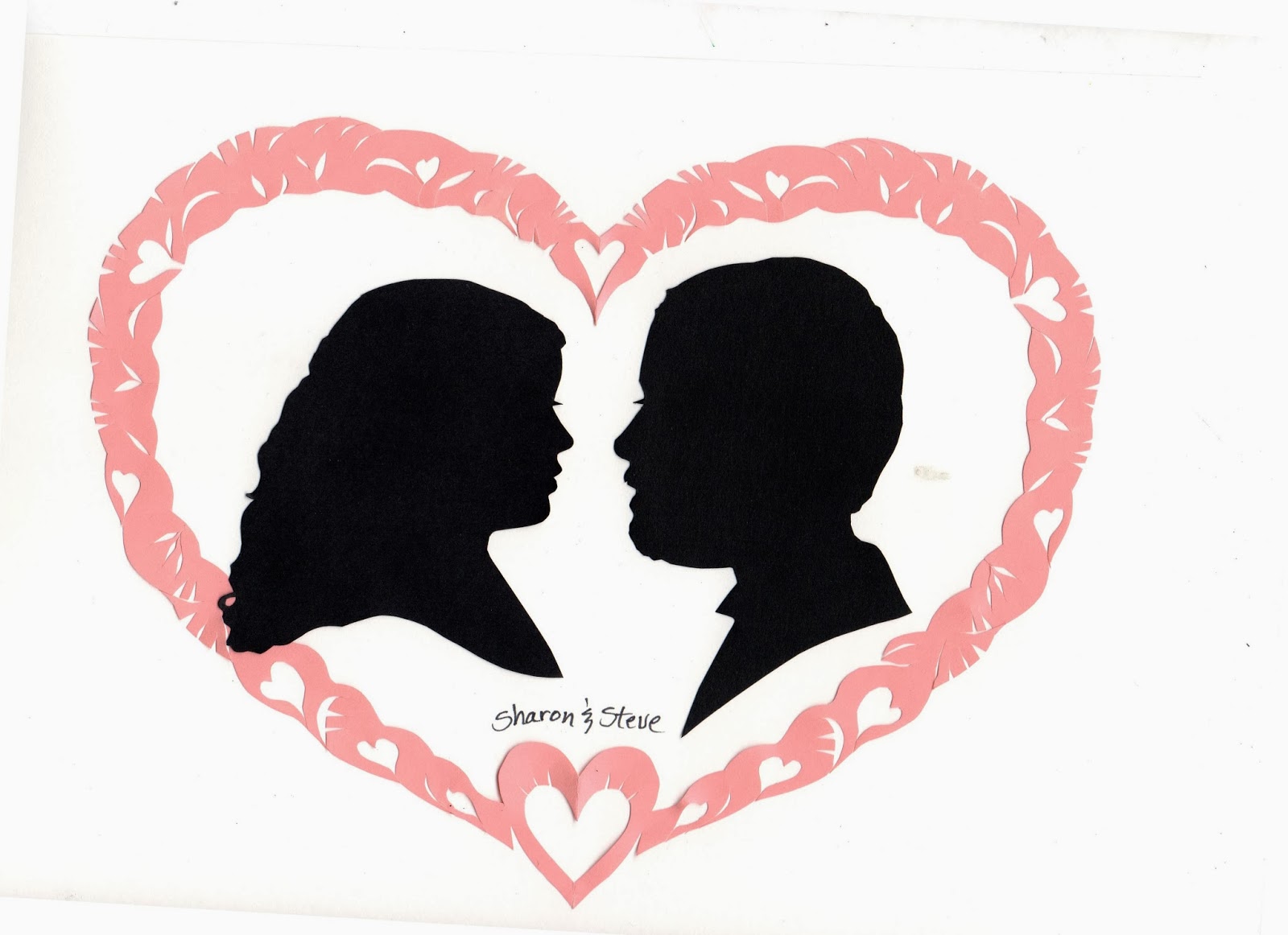 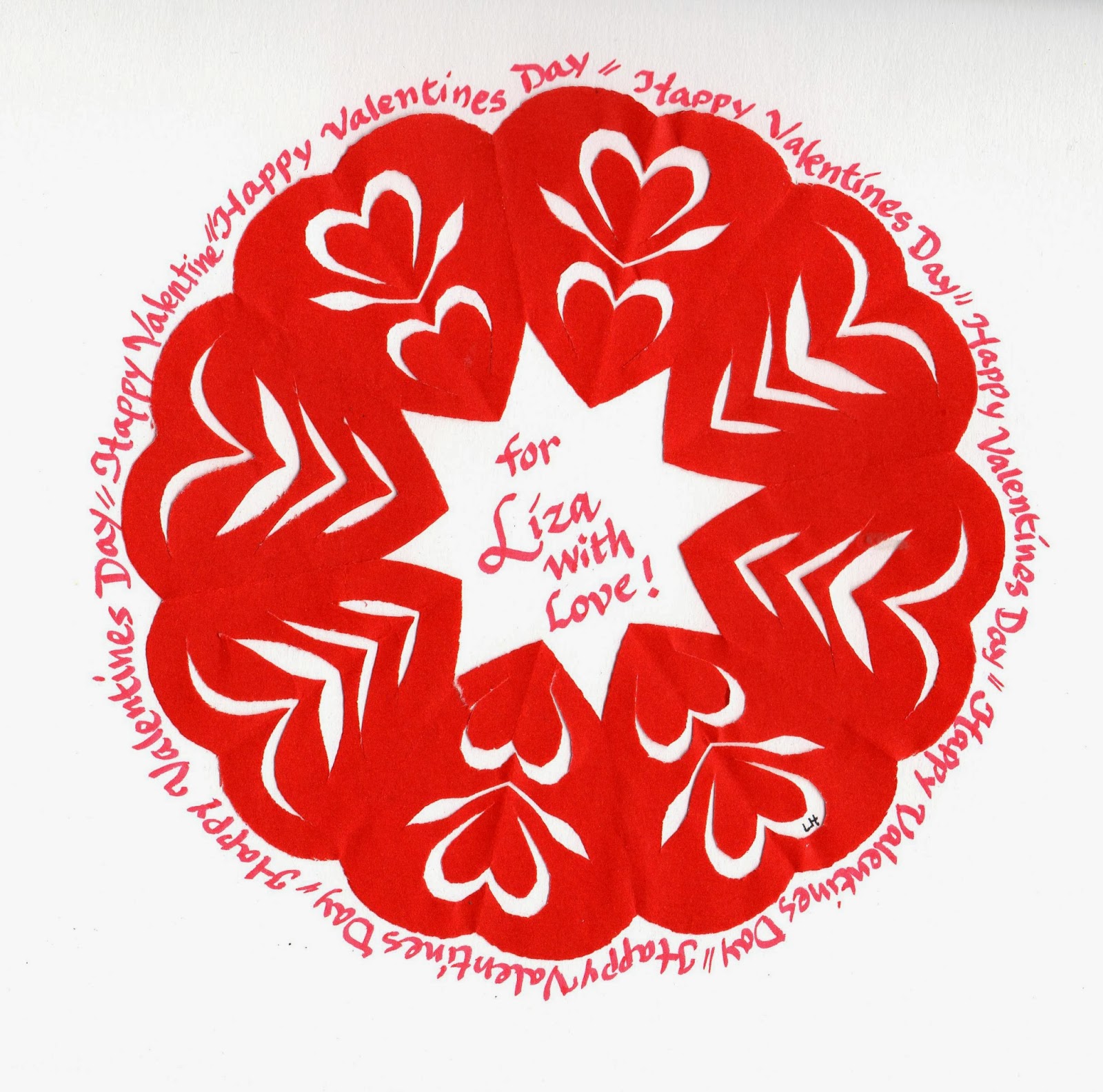 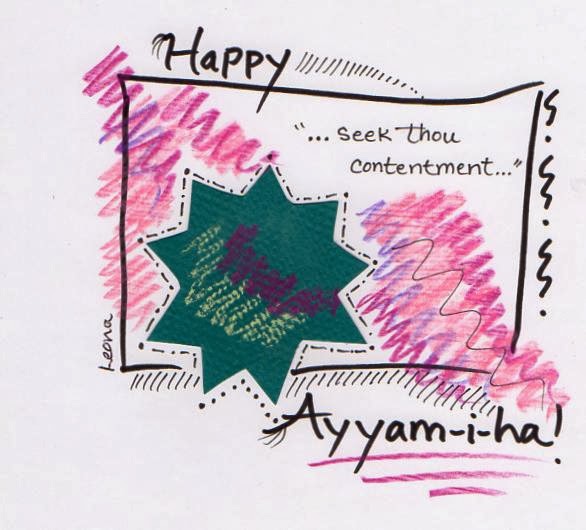 Here are two collages I did a while ago. These are both available in my Etsy shop as downloads. They can be printed out as cards for the
Baha'i Holiday-
Ayyam-i-ha which comes at the end of February.
https://www.etsy.com/listing/121113322/joy-ayyam-i-ha-card?ref=listing-shop-header-3 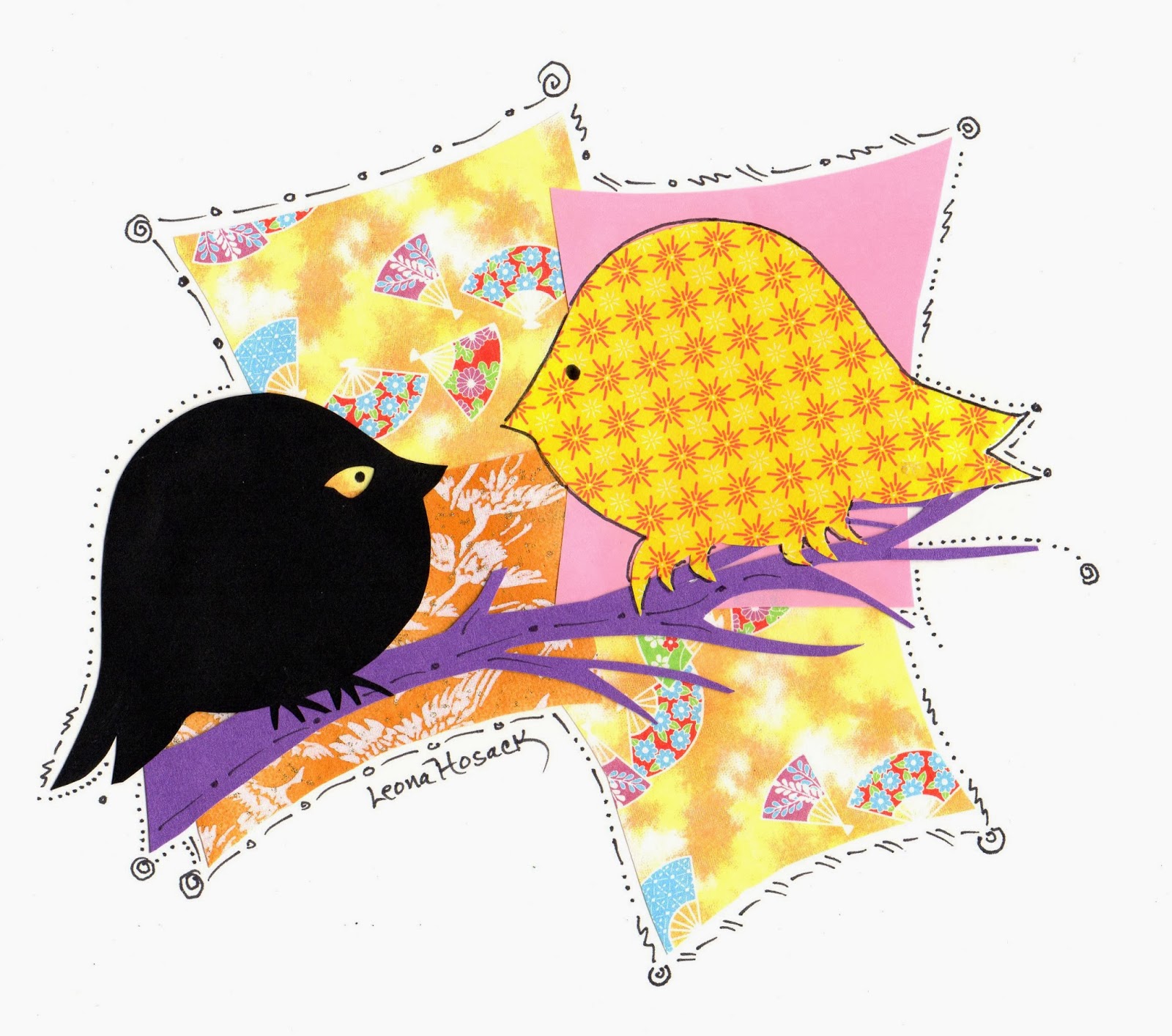 These two collages are my latest submissions to Illustration Friday this week. The theme is "Exotic"! I sometimes feel like playing with shapes and cut paper. Collage can so freeing and fun for me! 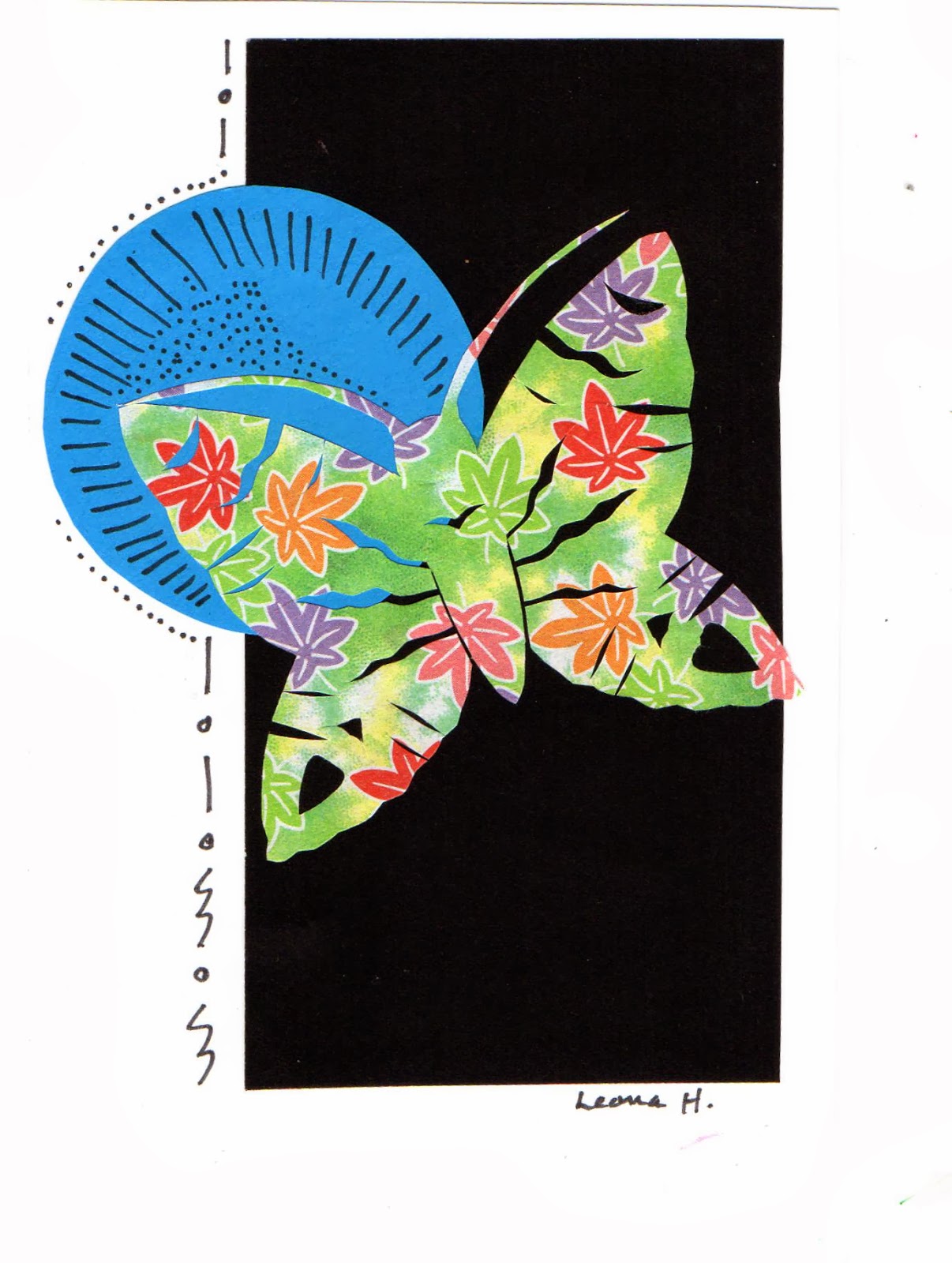 My book Babysitter Blues, produced by One Voice Press, has been available as an ebook on Amazon.com for some time now. And Ayyam-i-Ha is coming soon! It would make a great gift for the child in your life who is comfortable with reading chapter books.
It would also be appropriate for an older person as well, because the story is basically about a boy who is learning about the Bahai Faith for the first time and is applying some of the spiritual principals to his own life. You can download it right on your kindle, smart phone or other mobile device!
I am getting ready, even though it's been a while coming, for my kickstarter project to start. We hope to creat a print version of Babysitter Blues! More on that soon- hopefully next week! So here's a little about Babysitter Blues if you haven't heard of it yet!
Fourteen-year-old Evan feels like there's no tomorrow. He's trapped in an unending cycle of babysitting his much younger half-siblings while his mom juggles work and classes. He has little memory of his father, who died when he was young, and his mother has divorced the stepfather to whom he had grown close. A gang of bullies at his school delights in tormenting him. But a sympathetic English teacher and a new friend, Nava, help him to see that sometimes what seems to be a hopeless situation really isn't.

A wonderful review for my book on Amazon.com.-

Great book for adults as well as the tweens. Have told many people about it. This is something that the world needs now. Love and compassion and learning that we all make mistakes but can rise above them and find something better like thinking of others first.- Nancy K. Knowles
Here's an excerpt and illustration from Babysitter Blues. In this scene Evan is talking with his new friend Louis about the soul and it's existence in the next world.
“My Dad died from cancer, too, when I was five,” Evan said.  “And I never really thought much about the next world or the soul.  My mom and I used to talk about it when I was younger, and we used to say prayers for my dad, but it doesn’t come up much anymore, and we don’t say prayers together anymore either.  We don’t even go to church anymore, except at Christmas and Easter with my Nana Clark.  Anyway, how can you be so sure that people go on after they die?”  Evan studied Louis’ face as he looked out over the horizon.
In answer, Louis shaded his eyes and pointed.  ”Look!” he said.  ”See that boat way out there?”
Evan looked and nodded.  A passenger ship on the ocean was just starting to move away from them, growing smaller and smaller.
“We can see that ship.  Wait for it—” he paused and in a second it was out of sight, as if he had arranged for it to disappear at exactly the right moment.  Then he said, with his hand still outstretched, “But even when we can’t see it anymore, we know it’s still there.  It’s continuing its journey.  We just know it is!”
Evan nodded in agreement, and deep inside he felt that it was probably true.

Louis said, “Abdu’l-Bahá, the son of the founder of the Bahá’í Faith, said that when two people, like a husband and wife—or even a father and son, I suppose—have been completely united in this life, their souls have been like one soul.  Then, after one of them passes away, their union of heart and soul remains unbroken.”  He put his hand on his heart and continued, “I can feel in my heart that Kayla is like a bird free of her cage now, and in many ways I believe she’s still right here with me.  We’ll never really be apart.”  He turned to look at Evan.  “You probably still feel close to your Dad in some ways, even though you were little when he died.”
- February 03, 2014 No comments: 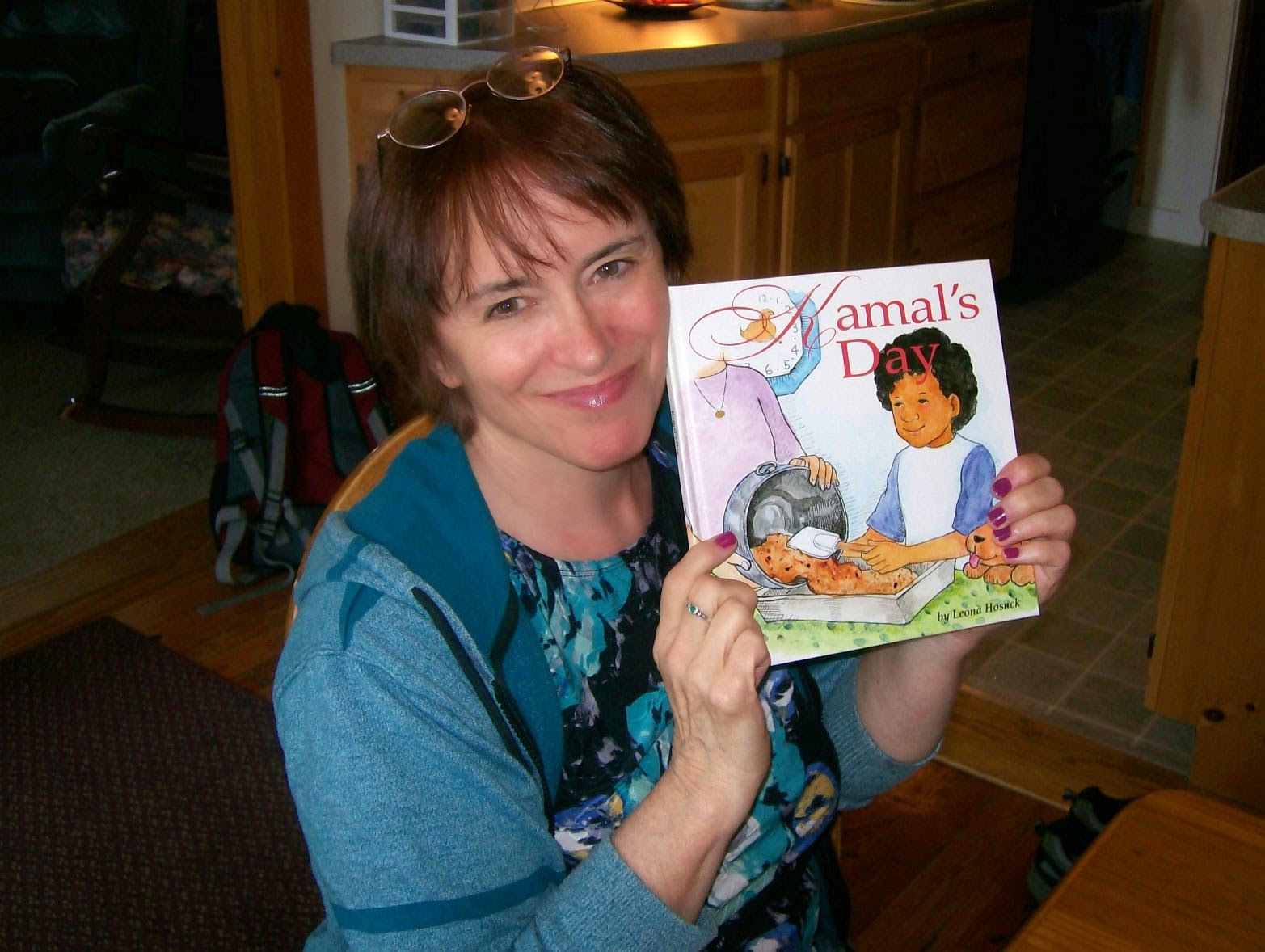 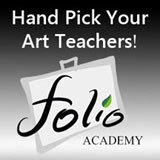